Fish make a great addition to any hobbyist’s or professional’s life, but as we all know, fish require water and appropriate living conditions. However, with the correct aquarium salt mix, you can up a fish’s life expectancy and lessen its likelihood of getting sick.

It may seem like a simple solution for those unfamiliar with aquariums, but some great benefits come from adding a little aquarium salt to your fish tank’s water.

Aquarium salt is often used in freshwater tanks because it has many benefits for treating fish with certain illnesses.

Adding aquarium salt to the tank can help reduce stress in fish, treat specific diseases, reduce the uptake of nitrite, promote the growth of slim coat, and help fight parasites.

If you use aquarium salt as directed, it can help improve the results you are aiming for. While many aquarium experts will advise against using aquarium salt daily, it benefits fish when used sparingly.

If you’re interested in learning more about the benefits of aquarium salt, you’ve come to the right page. Keep reading to learn more.

Freshwater Aquarium Salt: What Is It and What Does It Do?

Aquarium salt is a beneficial additive to fresh and saltwater aquariums. It helps to improve the water quality and clarity and provides several health benefits for aquarium fish.

We should fully discuss what it does to fully understand the benefits of aquarium salt in freshwater aquariums. Adding aquarium salt to your fish tank is common because it improves gill function, and this promotes the health of your fish because it makes it easier for them to breathe.

Aquarium salt is also beneficial for replacing essential electrolytes in the freshwater tank. The fish rely on these electrolytes to stay active and reach peak coloration.

However, many new people to aquariums realize that their opinions are divided once they begin researching aquarium salt. Some aquarium experts recommend using it because it can help treat illnesses and make life easier for the fish, while others argue against its use.

Aquarium salt is a mineral that adds specific ions to an aquarium to make the water more hospitable to fish. It can also be used to help cure some fish diseases.

As mentioned above, the fish are less stressed when adding aquarium salt to their water. This is because their body doesn’t have to work as hard. All water absorbed through the fish’s gills and skin gets excreted through the kidneys. The fish absorbs less water with salt added, making it easier on their kidneys.

The aquarium salt helps produce a protective slime coat if something has injured your fish. This coat is beneficial for protecting a fish from an injury, such as a cut, and it can also help a fish overcome a bacterial infection. 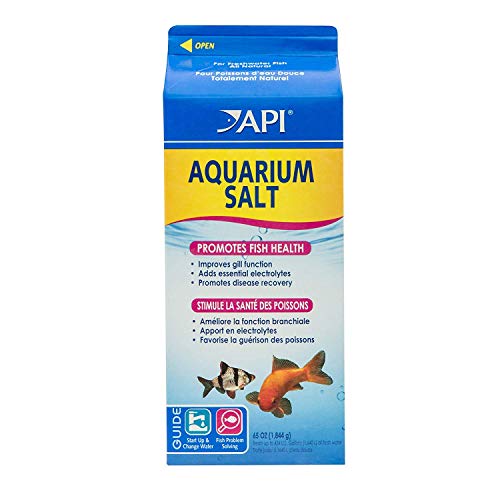 How Much Salt to Add to A Freshwater Aquarium

Aquarists must add salt to a freshwater aquarium to create a specific environment for their fish. The salt concentration in the water will determine the type of fish that can live in the aquarium water.

Adding salt to a freshwater aquarium is a common practice that can help improve water quality and clarity. The recommended dosage of salt per gallon of water depends on the salinity of the water, but a general guideline is one teaspoon of salt for every 5 gallons of water. For detailed mixing ratios and specific uses, we recommend you read the instruction on your choice aquarium salt bottle. 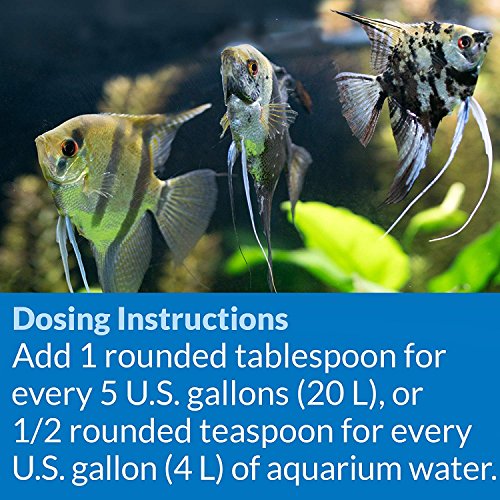 If too much salt is added to the aquarium, it can be dangerous. Aquarium salt overdose symptoms can include lethargy, loss of appetite, and scales standing on end. If your fish displays any of these symptoms, call a veterinarian.

If you believe your fish may have been poisoned by too much salt, you should call a veterinarian immediately and do a (partial) water change to lower the salinity.

Is It Safe to Use Aquarium Salt in A Freshwater Aquarium?

For most freshwater fish tanks, it’s safe to use aquarium salt. However, adding it daily is unnecessary, and it only needs to be replenished when you do a partial water change. It’s highly recommended that you pre-dissolve the salt in the water before it gets added to the fish tank.

When adding aquarium salt to the tank, start with one tablespoon of salt for every 5 gallons of water. It is recommended to start with this amount because it is safe for nearly every type of fish and plant. However, always research the fish species before adding salt because certain ones can’t tolerate aquarium salt.

If you use aquarium salt to treat a fish with an illness, it’s essential to monitor the tank for 24 hours after adding the first dose of salt. If you don’t notice any improvement, you can repeat this process for up to 4 days. By the 5th day, if more salt is needed, always do a water exchange of 25 %.

Here on thesprucepets, you can find more on aquarium salt dosage for specific purposes.

Are There Benefits to Adding Aquarium Salt to New Tanks?

It is good to add aquarium salt to new tanks before placing the fish in them, and this can help prevent the fish from experiencing intakes of lethal nitrates during the nitrogen cycle.

Aquarium salt is also suitable for reducing the water’s oxygen. If the oxygen levels are too high for the fish species in your tank, you can make the water a bit saltier. This way, the water will not hold onto the oxygen. If you add too much salt, in this case, you can put oxygen back into the water with movement.

Can I Use Table Salt in My Freshwater Aquarium?

Aquarium salt and table salt are not the same. Aquarium salt is used to make the water in an aquarium more saline.

While table salt does contain iodine, it’s not the best option in a freshwater aquarium. Iodine is essential for the healthy growth of aquatic plants, but too much can harm fish.

Aquarium salt is very beneficial for reducing the nitrate levels in the water to make it a safe environment for the fish. This can help them avoid a large intake of nitrate. High nitrate is dangerous for a fish’s environment and could even affect the growth of young fish.

What Happens if You Add Too Much Aquarium Salt to The Tank?

While it’s recommended to stay within the recommended dose of aquarium salt, there aren’t many problems linked to adding too much salt to the tank. The biggest concern to worry about is an overactive protective slime coat, and there is also the possibility of causing dehydration.

However, if you add too much aquarium salt to the water, you can always do a partial water exchange to get the water back to the proper levels.

What Are Symptoms of Too Much Salt in an Aquarium

If you notice any of these symptoms, it’s essential to test the salt levels in your aquarium and take steps to reduce the amount of salt if necessary. Too much salt can harm fish and other aquatic creatures, so keeping an eye on the levels in your tank is essential.

If you think you have too much salt in your aquarium, it is essential to do a water change to lower the salinity.

When to Avoid Using Salt in Your Freshwater Tank

Salt should not be used in freshwater tanks with scaleless fish, as it can be very harmful. Salt can cause the fish to lose electrolytes, leading to organ failure. In freshwater habitats, scaleless fish lack the added barrier that scales provide, making them intolerant to high salt levels. Corydoras catfish and most other catfish don’t have scales, same as for some loaches like clown loach, yoyo loach, and zebra loach. Tetras are particularly sensitive to salt.

Salt in a freshwater tank can be harmful to some plants. When using salt, avoid live plants as they can be damaged or killed by the salt. Even a small dose of salt can harm plants, so it’s best to use a separate tank to treat sick fish.

Final thoughts on the benefits of aquarium salt

There are many benefits to using aquarium salt in a freshwater fish tank. Salt in the water also reduces the stress that fish experience because their bodies don’t have to work as hard to survive.

One of the exciting things about aquarium salt is that it helps produce a protective slime coat, which keeps the fish protected while they are sick or injured and helps them with a faster recovery period. Aquarium salt is also known to help reduce nitrate and oxygen levels to make the environment safer for freshwater fish.

link to Betta and Cory Catfish; the Best Tank Mates or A Total Disaster

Corydoras and bettas are two popular species of freshwater fish. While they both thrive in similar climates, they have different care requirements. Bettas are territorial and sometimes aggressive,...

Continue Reading
link to Do Gouramis Need a Bubbler?

Native to Asia, gouramis are a popular fish for their beauty and hardiness, and you may have noticed that they like to swim to the surface and seem to be gulping in air. Is that really what they’re...