Bettas are a type of fish known for being aggressive toward other fish. However, there are some circumstances where two female bettas can live together.

Female bettas are known to be aggressive toward one another and will often fight if placed in the same tank. Two females together will likely result in a bloody battle, as they will fight for dominance. While bettas can be trained to get along with one another, it is generally not recommended to keep two females together, as they are likely to cause severe injuries to each other.

Is It Possible to Keep Bettas Together?

Bettas, also known as fighting fish, are a popular freshwater species. They are native to Southeast Asia and are known for their vibrant colors and long fins. Male bettas are particularly aggressive towards one another and will often fight to the death if kept together in the same tank. For this reason, it is generally not recommended to keep bettas together.

However, there are some cases where two betta fish can coexist peacefully. This is typically when the tank is large enough to provide each fish with its territory. It is also essential to ensure that the fish are of different sizes or colors so that one does not dominate the other.

Some people also choose to keep schooling fish with their betta, which can help reduce aggression since the fish will be more focused on interacting with their schoolmates than with each other. However, it is still essential to monitor the situation closely to ensure no fights break out.

It is possible to keep bettas together, but it requires careful planning and attention to detail. If you are unwilling to put in the time and effort needed to create a peaceful environment for your fish, it is best to stick with keeping only one betta fish.

We don’t recommend keeping two male bettas together, even with all the mentioned precautions. It is different with female bettas, they are less aggressive than males, and with the proper care, you can keep two female betta fish together. If careful and with a large enough aquarium, at least a 10-gallon tank, perhaps you can keep multiple female bettas.

What Happens if You Put 2 Betta Fish Together?

What happens if you put two betta fish together?

Male bettas are territorial and aggressive, so they will often fight each other to the death if put in the same tank. For this reason, keeping two male bettas together is generally not a good idea.

Female bettas can sometimes live together peacefully, but it’s more common for them to fight. If you put two female bettas together, provide plenty of hiding places and plants to seek refuge if needed.

You can usually keep baby bettas (called fry) together without problems. However, as they grow older, they may start fighting each other, so it’s best to keep an eye on them and be prepared to separate them if necessary.

Female bettas are just as likely to fight as male betta fish. Two female bettas may fight each other more often than a male and female pair, and this is because the dominant female will try to assert her dominance over the other fish.

What Is a Betta Sorority? 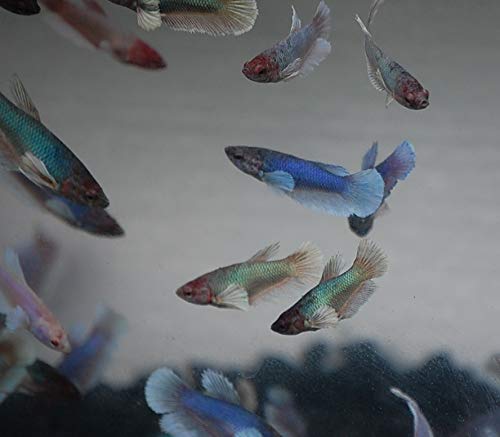 A sorority of Bettas is a group of female bettas living together in one tank. In the wild, bettas live in large groups called harems, consisting of one male and several females. A Betta sorority can range in size from 3 to 30+ fish in a home aquarium.

When female betta fish live together, they can sometimes get along and even build nests together.

The benefits of keeping a Betta sorority are many. For one, it provides entertainment value as the fish are constantly interacting with each other.

Why Shouldn’t You Have a Betta Sorority?

Betta sororities can be very interesting and entertaining, but they can also be problematic for several reasons:

Betta sororities are not recommended for the beginning betta keeper because the fish tend to be aggressive toward one another. This can lead to fighting and even death, especially in a small tank.

If you decide to set up a betta fish sorority, having a large betta tank, 10 gallons plus, is essential, so the bettas have plenty of space to swim and places for the fish to hide from one another.

How Do You Introduce Two Female Bettas?

To properly introduce two female bettas in the aquarium, it is recommended to use the “floating cup method.” This involves placing each fish in its small cup or container and then floating the cups next to each other in the aquarium for a few hours. This allows the fish to get used to each other’s presence without being able to interact physically. After a few hours, you can release the fish into the aquarium.

What Are Suitable Tank Mates for Female Bettas?

There are a few things to consider when looking for tank mates for female bettas:

Some suitable tank mates for female bettas include other peaceful fish, such as:

link to Getting Rid of Fish Tank Mold

Getting rid of fish tank mold is not a challenging task if you know how. With a few simple tips, you will be on your way to a fresh and healthy-looking tank in no time. Symptoms of Fish Tank...

Continue Reading
link to How to Clean Fish Tank Rocks

If you have a fish tank, you know that the rocks can get pretty dirty. But don't worry; cleaning your fish tank rocks is easier than it may seem. Your fish tank will look brand new with elbow grease...