Assassin snails are predatory invertebrates, and one of their favorite foods is shrimp. So, yes, assassin snails will eat shrimp. But, the good news is they won’t eat every kind of shrimp, just certain varieties. However, if they’re hungry enough, they’ll eat any type of shrimp available in the tank.

Will Assassin Snails Dine on Shrimp?

While it’s true that assassin snails will eat shrimp, this isn’t always going to be a scene of a tragedy. I have assassin snails and shrimp in the same aquarium. I have witnessed assassin snails eat dead shrimp, but I have never seen the carnivorous snails hunt live shrimp.

In some instances, it might be good if you have an assassin snail or two in a community tank to control shrimp populations. This way, they won’t overtake the tank.

Once certain shrimp species get to maturity, the assassin snails won’t be able to take them down. After a certain point, it’s unlikely that a snail will catch a healthy shrimp. Plus, it leads to better and stronger shrimp in the colony later on because of the snail’s ability to cull the herd, as it were.

Most shrimp are cautious and fast when they sense danger and have an almost 6th sense about it. They seem to move away the moment a predator begins to strike. Assassin snails are pretty slow when they hunt and only have two speeds: stop and super duper slow.

In these cases, if an assassin snail catches a shrimp living within its community, it is weak, slow, or dying. But this would be a sporadic occurrence. However, it does happen. They are more prone to hunting shrimp in a community tank when there isn’t enough food available.

Unless you have a rogue assassin snail, they often won’t eat strong, healthy, and active shrimp in the tank. But, if this is your situation, you’re going to have to remove the snail from the aquarium. And, if it does, there’s no way to anticipate or predict when the snail will strike.

What Else Do Assassin Snails Eat?

Aside from shrimp, assassin snails love to eat a variety of meats. Because they’re carnivores and scavengers, they feast on decaying and live organisms. This means they will clean up any meaty leftovers in the shrimp tank. So, this quality makes them suitable for a heavily populated community.

However, this also means that assassin snails must have a diet high in protein. They don’t eat plants or algae like other snails and must have a well-rounded meaty buffet. So, you can feed them things like:

When Assassin Snails Are Starving

If an assassin snail doesn’t have enough protein to eat, it will hunt and prey upon other species in the aquarium. They’ll eat a variety of pond snails along with Ramshorn Snails and Malaysian Trumpet Snails, nuisance snails, Bladder snails, and other unwanted snails. So, this means they’ll also eat the softer variety of snail eggs and shrimp fry.

But, it’s important to note that, unlike other snail varieties, a prey’s size doesn’t matter. If an assassin snail can catch it, they will eat it. Some hobbyists report their assassins eating other fish that aren’t typically part of their diet. But this is only in the case that they are starving. Assassin snails never eat algae or each other; they are not cannibalistic.

How Do Assassin Snails Hunt Their Prey?

Assassin snails are opportunistic hunters and go for carrion and live prey. They hunt in one of two ways: ambush attack or crawl and catch.

Ambush attacks are the most frequent of the two. They’ll burrow themselves beneath the substrate and wait for prey to get close enough. The carnivorous snail jumps into action and captures their dinner as soon as the time is right. They can stay under the substrate for several hours before they get hungry. So, when other snails and food swim by, they can leap up and out for a bite to eat.

When they crawl and catch, they skirt across the substrate and pursue their prey. When they catch it, they subdue the target with their foot. They then devour the prey through their eating aperture.

Sometimes, they’ll roam about looking for food by extending their foot or proboscis (an elongated sucking mouthpart). This foot comes in handy for finding potential prey or leftover food, or dead fish or dead shrimp.

Use of Toxins on Prey

Some people say that they use a toxin to immobilize their prey, but there is no evidence to support this claim. Besides, it’s unlikely they would need a poison, seeing as powerful and can overpower prey relatively easily. Not even snails with trapdoors, like Malaysian trumpet snails, are safe from hunger assassins. 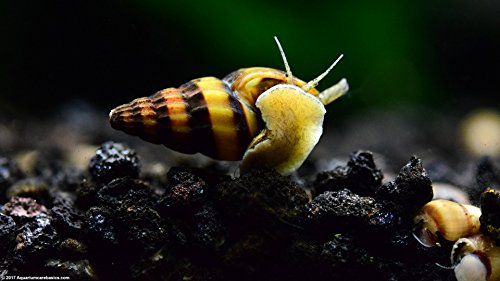 Click the image above to see the item on Amazon

How Do Assassin Snails Eat?

Assassin snails have an appendage that looks just like a fork. They extend this into their prey and retract it into their mouth-like aperture. If they have a cavity, they’ll extract the food from it with this built-in fork. This is also the exact mechanism they scan the tank floor for meaty leftovers.

Can Assassin Snails and Shrimp Be Good Tank Mates?

You can house certain shrimp with assassin snails. But, you want to be careful with this because, to these snails, the size of prey doesn’t matter, and they do like to eat micro varieties. Therefore, many hobbyists that do keep these two together report great success with:

If you choose to house any of these types of shrimp with an assassin snail, the shrimp must be considerably more significant than the snail. This is just a safety precaution, so you don’t come upon a horrible scene one day.

Also, with some varieties of shrimp, specifically the cherry shrimp, you have to make sure there are enough meaty options. This is because they will compete for food if there isn’t enough. While the cherry shrimp won’t eat the snail, it will eat the slime that comes from a fresh snail or consume deceased snails.

In this case, if it annoys the assassin enough, it could end up in the act of aggression. Which, in the end, may result in a tragedy. Therefore, if you keep both assassins and shrimp in a community tank, a caretaker must pay close attention to their food supply and maintain proper water parameters.

Unlike other shrimp, cherry shrimp don’t like eating floating food. They prefer what they can scrounge for on the floor of the aquarium. This is where things can get heated between assassin snails and cherry shrimp. If food is scarce, they’ll box each other over it.

Food for Both Species

This is why it’s good to provide sinking food and treats like pellets and wafers. This way, everyone will have enough to eat, and you’ll avoid a scene. However, these types of shrimp will outnumber the snails, and even the babies will eat all the snail’s food. This will create problems keeping them in the shrimp tank.

So, it will be essential to devise a way to keep shrimp populations down while maintaining the happiness of your assassin snails. This is a delicate balance because the food requirements for both will throw off the tank’s water parameters. Such an event will create misery for all residing in the aquarium.

However, the shrimp will also eat snail eggs and feces. It’s strange, but these things provide rich minerals and nutrients keepers aren’t usually able to provide. But it’s a potent food source for them and a beneficial way to keep your tank clean.

That said, snails will also eat shrimp eggs. So, this is why it’s a delicate balance when keeping these two together. If you plan on breeding both the snails and shrimp, this feeding behavior on each other’s young will be difficult.

However, having both allows for natural pollution control in the tank. So, it’s essential to think long and hard before putting them together. You want to develop a solid plan, ensure there are always exact water parameters and plenty of space for each.

While assassin snails will eat shrimp, they usually go for those already dead or dying. Therefore, if you want to keep both in a shrimp tank, ensure you get the kind of shrimp that will be much bigger than the snails. You also want to ensure there’s enough food for each.

Assassin snails must have a high protein diet with a good variety of live and dead offerings. If you’re housing these two together, you shouldn’t see a problem unless the assassin snail is starving. Then, you may have a problem with your hands.

link to Are Shrimp Nocturnal? This Study Has Some Surprising Results

Continue Reading
link to Learn how To Keep Your Cabomba Plant Looking Its Best!

Cabomba plants are often used in aquariums and can be a hardy addition to any collection. Here are some tips on how to care for one. The Cabomba plant is relatively easy to care for and grow, and...