It’s true; Bettas will eat pretty much anything that moves with a shrimp-like tail. And that’s a problem if you want to keep shrimp in the same tank since a hungry Betta will gobble them all up. Betta fish are tropical fish that many people keep in aquariums, and they have an exciting relationship with shrimp that you can take advantage of if you want to keep shrimp in your betta fish tank.

If you want shrimp in your Betta aquarium, it is best to go with Amano shrimp or Ghost shrimp. Cherry shrimp and other dwarf shrimp might survive if you have enough plants, moss, and other hiding spots, but they might get hunted down by your Betta.

The Types Of Shrimp Species That Can Go With Bettas

Betta fish are territorial and aggressive towards other species living in the same tank. The easiest way to solve this problem is to keep ghost shrimp with a Betta fish. Ghost shrimp are the easiest invertebrates to keep in your freshwater aquarium. They are peaceful creatures and don’t bother plants, fish, or each other.

Can Ghost Shrimp Live With Bettas?

Ghost Shrimp is a better option if you are looking for shrimp to live with Siamese fighting fish. They are small, peaceful, and don’t require much space. They also help to keep your tank clean. However, a few things to consider before adding ghost shrimp to your tank. They should be kept in a 10-gallon or larger tank that contains two or more ghost shrimp, and they need a tank with plenty of hiding places. The ghost shrimp will keep the bottom of the tank cleaner than if you don’t have the shrimp because they will eat any leftover food, while the Betta fish will not.

Can Amano Shrimp Live With Bettas?

Amano shrimp can live with Betta fish. Betta fish are highly territorial, so they will probably pick on your shrimp, especially if they’re a smaller species. A general rule of thumb is that the shrimp should be at least as large as the Betta before placing them together in the same tank.

Can Cherry Shrimp Live With Bettas?

Bettas are known for their beautiful colors and also for being a very finicky fish. I have read some reports that Bettas have left Cherry shrimp alone for a long time and, after months of living together, all of a sudden would kill off all the dwarf shrimp they see. Not only to eat them but, in some cases, to kill them.

If you plan to keep dwarf shrimp with a Siamese fighting fish, you must have enough hiding spots for your shrimp.

The concerns for the Crystle red shrimp are similar to those of the Cherry shrimp. Like all dwarf shrimp species, they don’t have their size working for them. The Bettas will leave it alone or might attack it depending on the fish’s aggression. For Chrystal reds to become a good betta fish tank mate, it needs lots of hiding places for both the adults and the shrimplets.

Can Bamboo Shrimp Live With Bettas?

Bamboo shrimp are often too big to be bothered by Betta fish; they could seem a great match as a betta tank mate at first sight. The problem with Bamboo shrimp is their living requirements. Although the Bamboo shrimp and the Betta share an overlapping temperature range and arguably a PH range, they can both live in Bamboo shrimp like a medium to strong flow in the aquarium to filter out the food needs. You don’t want a strong flow; Bettas like to chill in water with the slightest bit of water flow you can manage.

Can River Shrimp Live With Bettas?

River shrimp are another excellent option as a betta fish tank mate. You can keep them in a betta tank, but you will have to take care of letting them adjust to the betta tank conditions. You can find shrimp in rivers worldwide, and a lot of river shrimp species can live in the warmer water the betta fish needs, but you will need to take your time to let them acclimatize to the temperature.

The female betta fish is smaller than the male Betta. Because of this size difference, you can have more luck with a female betta than a male betta fish when hunting and eating dwarf shrimp. The same rule applies to all fish; if it fits in their mouth, it’s food. 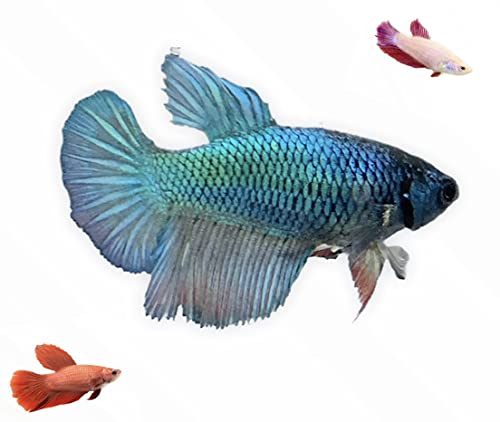 Keeping shrimp alive in a betta fish tank is very different from putting shrimp in a community tank or bowl. Shrimp in a betta aquarium has to contend with many things that don’t apply to other shrimp tanks: bettas are notoriously aggressive and territorial, and they’re prone to harassing their tank mates and eating whatever they can get their paws on. To put it bluntly, Bettas are shrimp-eaters, and they’re going to treat your shrimp as lunch if you don’t take precautions. These are the most important tips:

Keeping shrimp can be challenging in a tank with a betta fish since bettas are natural shrimp predators. Bettas are also very aggressive, so they can chase your shrimp around the fish tank, which is stressful for the shrimp. Finding out what kind of shrimp can live with a betta is not always straightforward, but I hope I have given you an idea about it. Ultimately, it is essential that your shrimp are happy and your Betta is happy.

The best way to keep your freshwater shrimp alive in a betta tank is to provide them with many places to hide and not let your Betta get too hungry.

Dwarf shrimp, in general, can have a hard time living with a Betta fish; whether Neocaridina or Caridina shrimp is the size that matters and the cover that can make a difference.

link to Getting Rid of Fish Tank Mold

Getting rid of fish tank mold is not a challenging task if you know how. With a few simple tips, you will be on your way to a fresh and healthy-looking tank in no time. Symptoms of Fish Tank...

Continue Reading
link to How to Clean Fish Tank Rocks

If you have a fish tank, you know that the rocks can get pretty dirty. But don't worry; cleaning your fish tank rocks is easier than it may seem. Your fish tank will look brand new with elbow grease...